Laetiporus Sulphureus – Chicken of the Woods

Chicken of the Woods is an awesome mushroom that has the texture of chicken and can really take on the flavor of the dish you are preparing. How to Identify Chicken of the Woods

Chicken of the Woods will always be growing on decomposing logs or dead trees and tends to fruit year after year. The top side of the mushroom is a beautiful orange and the underside will be yellow and won’t contain gills. You will see 1000s of tiny microscopic pores. It is a polypore mushroom in the same family as Turkey Tail or Rishi.  Chicken of the Woods is much softer specifically as you get out to the ends of the mushroom.

Photos of Chicken of the Woods 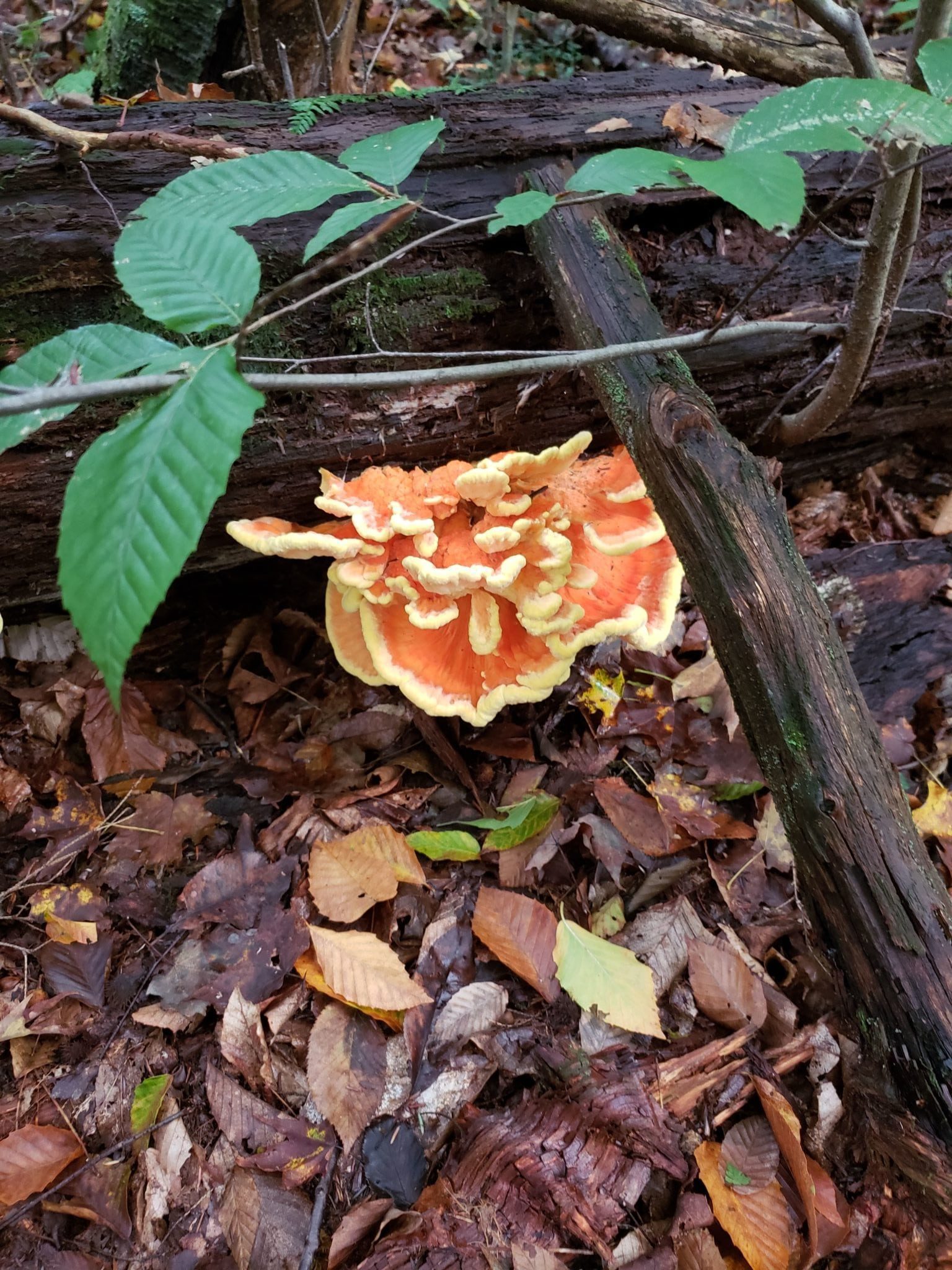 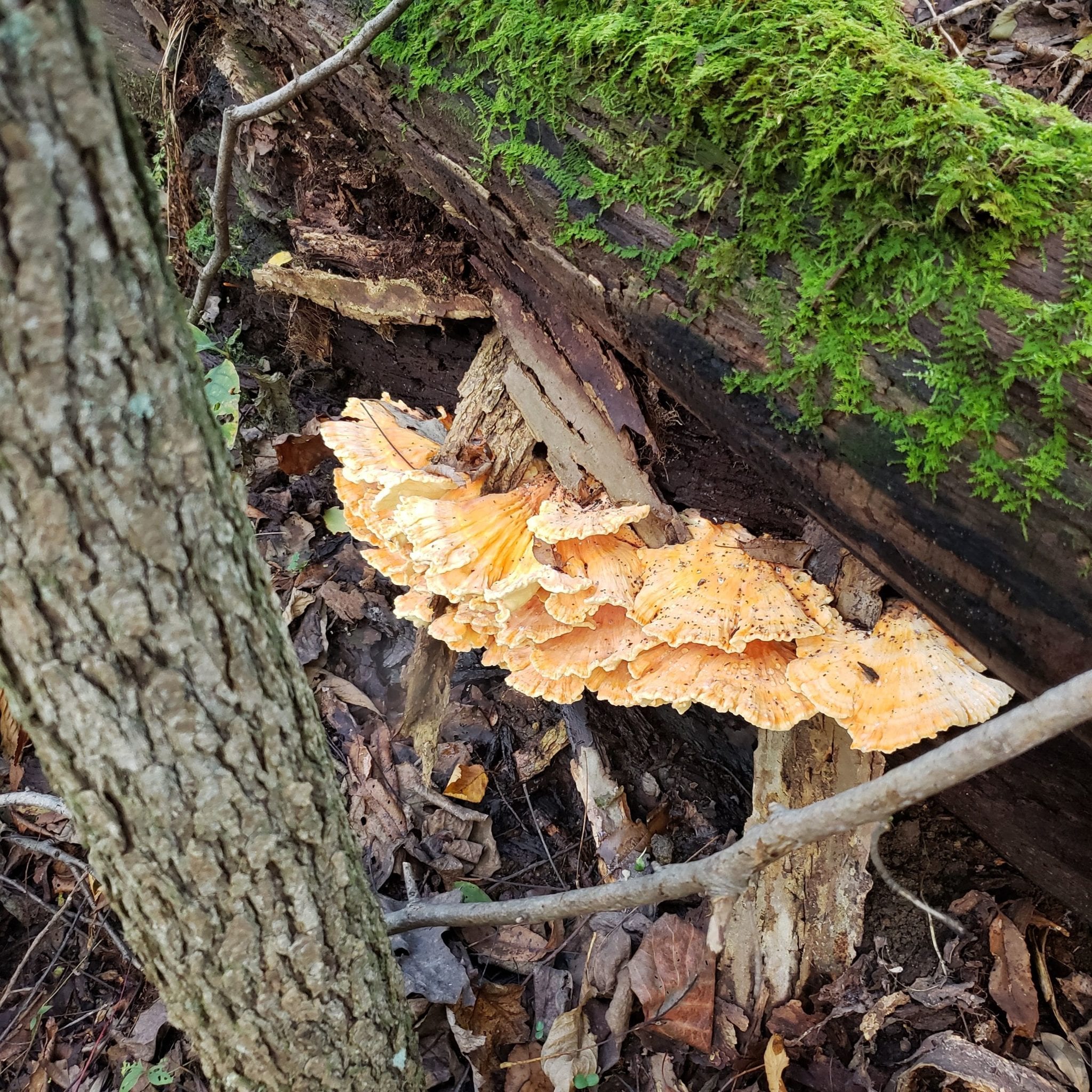 More on Chicken of the Woods

0:14
Hi everyone. I’m Adam Harrison from learn your land. It’s the beginning of September and we’re approaching the full Harvest Moon, which means that summer is slowly transitioning into autumn. Now many people lament, these final days of summer, unless you’re a mushroom hunter, in which case you’re getting really excited because autumn is such a great time to get out and look for a few choice edible mushrooms, including this one right here. So this is late to pour self curious, commonly known as chicken of the chicken of the woods, mushroom sulfur shell, it’s a separate FIDIC fungus, which decomposes dead or decaying organic material. There are quite a few species in the United States, here in Pennsylvania we really see a lot of late to Porcel furious. There’s also late to poor Cincinnatus, which is characterized by having lighter hues of whites in pinks, is also one that goes on conifers later pours conifer cola. For this video we’re going to focus on late to pours so furious because it’s the one that I’m most familiar with, it’s the one that I most frequently see here in Pennsylvania. Now, this is one of the easiest mushrooms in the forest to identify if you are novice mushroom hunt if you’re just getting into this, this might be one worth focusing on, at least in the beginning, if you spent any time in the woods, hiking, backpacking, especially this time of year, September, October, you have to work really hard not define this mushroom, you can see it, even at a distance, it has an unmistakable yellow orange color, and it grows in shelf like clusters on standing or fallen wood. And so some of this word has fallen maybe this year, you won’t see it possibly that year, but give it some time maybe the year after, Or year after that or the following year really likes well decomposed logs, it tends to fruit in the same area, year after year, so keep checking your spots. Now key identifying characteristic is its underside, it’s yellow, and it doesn’t contain gills it contains 1000s of tiny microscopic pores and these pores. Their role is to release spores, this is how it reproduces. So this is a poly pour mushroom it’s a Nepali poor family kind of like Turkey Tail, or Rishi, but unlike those mushrooms, this one’s much softer much more pliable, and that’s what makes it a good choice edible mushroom. And what’s unique is that I don’t think this mushroom really requires a lot of rain to fruit. We haven’t had a lot of rain these past few weeks, and even in past years when we don’t have a lot of rain, you could still find this mushroom in the woods. Now, there aren’t too many lookalikes to this mushroom. However, it could be confused for maybe two species. If you stretch your imagination, perhaps chanterelles chanterelles or orange kind of like chicken, mushroom, but if you flip chanterelles upside down, they don’t have pores. They don’t even have gills they have something called ridges, but chanterelles grow on the ground, not on wood, not in self like clusters, the chemtrails are choice edible mushrooms anyway and if you harvest those Well, that’s a very tasty mistake to make. Unlike the next one which is Jack Atlanta, you don’t want to confuse it for Jack O’ Lantern, at least if you’re considering eating it because Jack O’ Lanterns are poisonous they’re toxic if you consume it, you’re gonna have a rough next couple of days, it actually is a violent purgative to distinguish the two flip, Jack O’ Lanterns upside down and they have gills on the underside, not pours. They have gills on the underside they grow in dense clusters. And another cool characteristic about Jack O’ Lanterns is that they are bioluminescent, which means they have the ability to glow in the dark. So if your mushroom grows and shelf light clusters on standing or fallen wood. It’s yellow and orange and neon inside has 1000s of tiny microscopic pores, chances are you have chicken of the woods.

3:46
Now before we focus on edibility what I really want to focus on are the medicinal properties you know many people talk about Chaga and Reishi in Turkey Town my talking in birch polypore and so on for medicinal mushrooms, and this one doesn’t really get a lot of attention however after digging through the research. This one should definitely be considered a medicinal mushroom. There have been several studies on chicken of the woods, especially this year 2015 For example, brand new study just came out showing that a particular triterpene compounds known as acetal Emerich COIC acid possesses strong anti-inflammatory properties in a dose dependent manner meaning that the more that is ingested, the stronger the anti-inflammatory properties are exhibited. And it works by inhibiting Cox two enzyme now Cox two enzyme is responsible for the inflammatory cascade in the body, and a lot of prescription medications that deal with inflammation are Cox two inhibitors, so perhaps chicken of the woods or at least this compound acetal Eboracum acid could act as a viable alternative to some of these really nasty prescription medications out there. Another study from 2015 has shown that a particular lipid extract from chicken of the woods, demonstrates potent antibacterial and antifungal properties so liquid would be a nonpolar extract or fat extract definitely not water it needs a nonpolar solvent to pull it out, but as bacteria and antifungal. In another study has shown that this is so high in antioxidants very high in antioxidants, including Chlorogenic Acid kaempferol and corseted, you can tell this is high in porcelain because of its color course it’s in is a yellowish pigment and of course the undersides yellow it’s got some orange in it as well. Of course it is one of the most well-researched antioxidants out there but not only that, it’s a well-researched, anti allergenic compound anti-inflammatory and anti microbial as well. So if you’re looking to develop a medicinal strategy based in the wild organisms of your ecosystem, perhaps consider using chicken of the woods as well in addition to some of the other plants and fungi out there. Now of course chicken of the woods is a choice edible mushroom many people know and love it as such and it has a flavor reminiscent of chicken. And I encourage you to harvest that when it’s young, that doesn’t have to be a little nub growing from a tree, you can let it grow a little bit but the longer that you wait, the less likely that it will be available because somebody or some animal might be used to it indefinitely cooked the whole thing you don’t want to eat it raw, it can cause digestive upset and some individuals, even if it’s undercooked so thoroughly cook it, as it gets a little older tends to get a little buggier and a little too tough to consume the Katyn really builds up tightens the fungal cell membrane molecule and gives it that tough texture, you can still harvest maybe some of these outer portions of it that might be the most tender as you move towards the core, it gets a little too tough a little too tightness, however, you can harvest that you can throw that in soup stocks make a nice soup stock out of it, you can make infusions or even tinctures out of it as well. I like to cook this maybe 1015 minutes, a little bit of butter or olive oil saute it, add some red wine, at the end let that cook-off, and I’ve got a great dinner ahead of me whenever I prepare it like that. Thanks so much for watching this video really appreciate it, I encourage you to get out and look for chicken of the woods this time of the year, even if you’re not interested in harvesting it for food or for medicine is still a great species to appreciate just because of its color. It’s not every day you see something that’s so bright orange and yellow in nature, and it really has the ability and the power to brighten your day, literally metaphorically metaphysically speaking. I also encourage you to check out, learn your land, calm to database and community of naturalist nature clubs nature organizations in the northeastern United States slowly making its way out west of the entire country. And you can easily follow naturals in your area, learn when these wildflower walks are happening mushroom forays forging workshops tree identification classes, and a lot more and you can join the community by hitting the join button at the top, you can stay updated that way. I’d also really love it if you would consider subscribing to my youtube channel if you subscribe you can stay updated whenever I release videos, and I have a lot of videos that are in the pipeline that I plan on sharing with all of you, related to the floor the fun and the fun guy have a beautiful earth. So thanks so much for doing that. Thanks again for watching this video.

Happy mushroom hunting, and I’ll see you in the next video.